At the 27th edition of the Prix Bayeux Calvados-Normandie des correspondants de guerre, AFP photographer Anthony Wallace has received the Public’s choice Award for his series "Hong Kong: A Popular Revolt" and was also awarded second place by the international jury in the Photo trophy.

Anthony Wallace is doubly rewarded for his work featuring the pro-democracy protests that sparked several confrontations with the city’s police. Challenges to the law allowing extradition to mainland China have turned into a revolt against the Beijing regime. Added to this is the fear that the semi-autonomous territory will see some of its freedoms disappear. Among the demands being made by protesters is an inquiry into the police, an amnesty for the more than 6,000 people arrested and the right to elect Hong Kong’s leader.

Having graduated with an MA in Photographic Documentation and Photojournalism from the University of the Arts, London, Anthony Wallace began working at AFP as a photo editor intern, before definitively joining the Agency several months later in the same role, which he held for 4 years while also reporting at weekends. In 2016, he became chief photographer for AFP’s Hong Kong bureau. He covered a number of news events in Hong Kong as well as the Asia-Pacific region: the 2014 Umbrella Revolution in Hong Kong, the Christchurch mosque shootings in New Zealand and the major earthquakes in Taiwan. Anthony Wallace said: "I am deeply honoured to receive this award and dedicate it to the memory of my recently deceased grandfather, who flew three missions over the channel with the RAF on D-Day during WWII. My heartfelt thanks go to the twelve other AFP photographers and my bureau colleagues, with whom I covered this story as a team."

He picked up personally this year the Prix Rémi Ochlik at Visa pour l’Image in France and the Human Rights Press Award for the same work and the Award for Excellence at the SOPA, one of Asia’s most prestigious journalism prizes, with Philip Fong, Hector Retamal, Nicolas Asfouri and Isaac Lawrence from AFP’s Hong Kong bureau.

"The Prix Bayeux is the epicentre, the centre of gravity of our profession," said award-winning British journalist Ed Vulliamy, who presided over the 2020 jury.

"What is wonderful about the deliberations of the jury is that there is no right or wrong: we have to make a judgement but it is impossible by definition. We are choosing between best and better." Photographer Aaref Watad in the Young Reporter category for the Credit Agricole Normandie Prize of the International Jury for his series "Syria, still in the hell of war". He followed the exodus of civilians in the regions of Aleppo and Idlib during the regime and its Russian ally to the camps on the Turkish borders where some have found refuge. Photographer Abdulaziz Ketaz in the Photo category for Nikon Prize of the International Juryf or his series "Ongoing Shelling in Syria". On the 15 photos of the series, we can find Members of the Syrian Civil Defence (White Helmets) and civilians rescue civilians from the rubble after reported air strikes from the regime and its ally Russia in Idlib province. 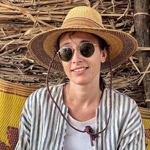 Journalist Célia Lebur in the Written Press category for the Ouest France-Jean Marin Prize for « In Mali, the birth of peasant jihadism », série de reportages sur les Peuls, one of the last great nomadic people on Earth, at the heart of almost every major event in the Sahel desert.

You can find here the special report, the joint work of AFP photo, video and text reporters on the ground enhanced by our digital storytelling team dedicated to them.