Tata gives hand signals for his men to drop to the rainforest floor as the searing whine of a chainsaw fades, their mission to save a critically endangered piece of paradise in the Philippines suddenly on hold.

Former para-military leader Efren "Tata" Balladares has been leading the other flip flop-wearing environmental crusaders up and down the steep mountains of Palawan island for the past 15 hours in the hunt for illegal loggers.

One of them is nursing a swollen left arm that was broken a few days earlier when he fell during a reconnaissance trip. He has yet to see a doctor and it is just wrapped in a bandage.

Having slept overnight for just 30 minutes on a forest track, they should be exhausted from the hike.

They could also be forgiven for being frozen with fear: team members have been murdered to stop their operations and others bear scars from the razored teeth of the chainsaws they seek to confiscate. But with their targets so close, just a short sprint through ferns and other scrappy lowland rainforest foliage, the adrenaline of the hunt's imminent climax is surging through them.

The chainsaw starts up again after a few minutes, providing the necessary noise to silence their approach.

The seven para-enforcers descend like a pack of wolves on the two loggers, who are sawing into the cut-down trunk of an Apitong tree, a critically endangered hardwood that is a favourite among  developers in the nearby tourism boom town of El Nido.

As the para-enforcers approach, Tata's voice roars for the first time all day: "Stop! Stop! Stop! Face down! Face down." he loggers, young men wearing ragged clothes similar to their new foes that indicate mirrored lives of poverty, are stunned and simply stand in bewilderment or fear.

The para-enforcers do not brandish any weapons themselves.

But within a few seconds Tata and his men disarm the loggers of their machetes, scan the site to ensure there are no hidden rifles or pistols, and seize the chainsaw.

Tata starts asking the loggers questions, using a commanding but non-threatening tone of a well-trained policeman or soldier.

"Do you have a permit for the lumber? Is the chainsaw registered?"

The loggers, squatting on the fallen tree trunk with the para-enforcers holding their shoulders, meekly respond in the negative.

"Ok, this is how it goes. We are the Palawan NGO Network, or PNNI," Tata says.

"We're here in the mountains because according to reports, illegal logging is rampant here."

The para-enforcers give the loggers a receipt documenting the confiscation of the chainsaw and scurry back into the forest, in the remote district of Mesecoy, after an encounter lasting just a few minutes.

Tata appears unflappable during the gruelling mission, showing no fear or hint of fatigue.

The 50-year-old has had a lifetime of conflict to steel him, having led a private militia for a corrupt general before flipping sides two decades ago.

But during a short meal break of rice and dried fish after the confiscation, the stump of a once-giant Apitong behind him, Tata breaks down as he despairs at the corruption that led him to become a civilian para-enforcer.

"This should be the work of the government but they are not doing their job. Who else is going to stop this if we're not here," he says. 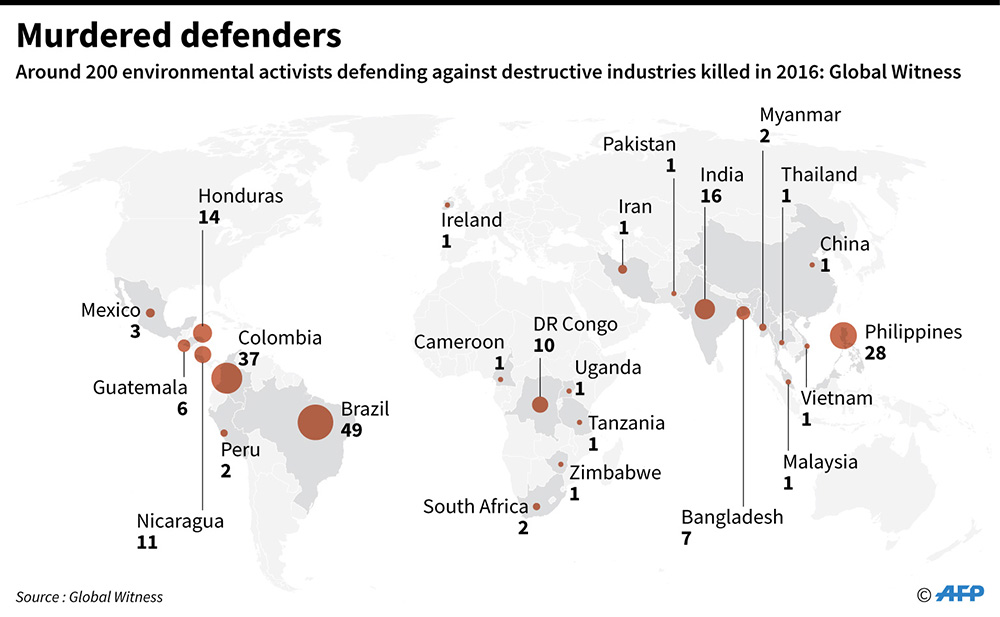 Palawan is often called the Philippines' last ecological frontier, as it is home to most of the nation's remaining forests and its waters are renowned as a global biological hotspot.

With its stunning limestone cliffs, lagoons with turquoise waters and long stretches of untouched beaches, top tourist magazines rate Palawan one of the world's most beautiful islands.

But it is also a magnet for corrupt businessmen, politicians and security forces seeking to plunder the island's natural wealth.

With weak or corrupt authorities often unwilling to take on the fight, the Palawan NGO Network Inc, or PNNI, seeks to fill the void.

The group has a strangely corporate name for an anti-establishment band of cash-strapped environmentalists who believe traditional campaigning to save the island's resources can do little to stop the onslaught of corruption.

Their answer is direct action.

They use a little-known citizen's arrest law, plus the support of local communities, to confiscate chainsaws, mining drills, cyanide fishing gear and any other equipment used to destroy Palawan's environment.

The para-enforcers have confiscated more than 700 chainsaws since PNNI was established nearly two decades ago, according to its founder and leader, environmental lawyer Bobby Chan.

In the small front yard of the group's headquarters in Puerto Princesa, the capital of Palawan, a Christmas tree made up of more than 100 chainsaws stands two storeys high. 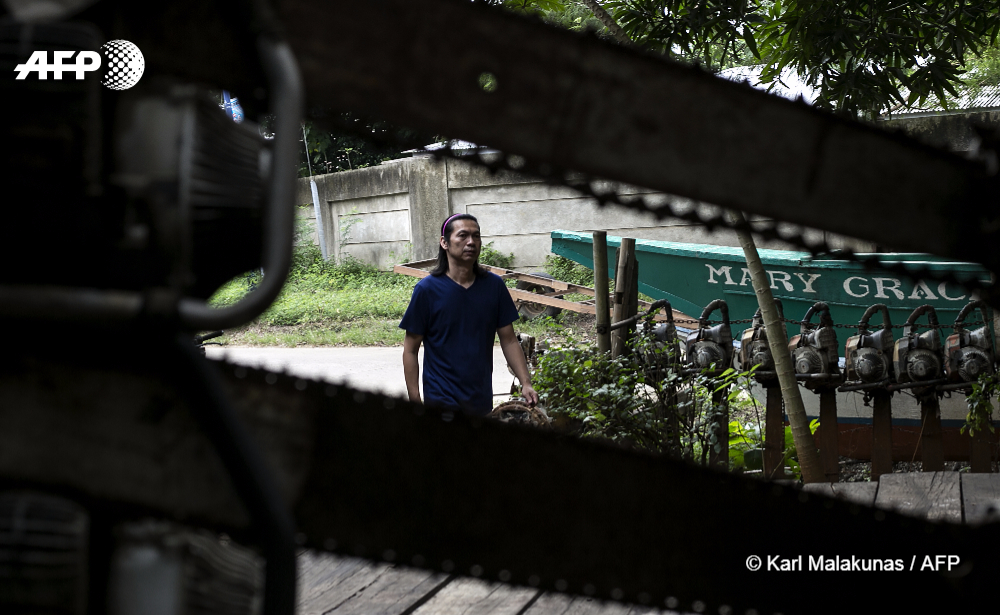 The property's fences are made up of other chainsaws, and the back yard is scattered with more.

Also crammed in the front yard is a large boat that had been used to transport illegal logs to Malaysia, and two heavy drills the size of lounge room sofas that were confiscated for mining gold.

Home-made rifles and pistols seized from illegal loggers and fishermen hang on the walls inside the small, four-room headquarters.

Displaying the confiscated equipment in such an audacious manner sends a message to the powerful that the para-enforcers will not be intimidated, according to Chan.

"We want to dispel that idea that nothing can be done for big environmental crimes," Chan says.

But they are willing to pay a price that most other environmental campaigners won't: their lives.

Chan recounts how he and his team found the body of para-enforcer Roger Majim buried in a shallow grave on a beach in 2004. "The loggers put his flip flops on the mound where they buried him. When we unearthed him he had, I think, 16 stab wounds. His eyes were gouged out. His tongue was cut off. His testicles were cut off and placed in his mouth," Chan says.

"So it was a message that this is where we buried your man and that if you keep on doing this kind of work this is what’s going to happen to you."

Twelve PNNI para-enforcers have been murdered since 2001, most recently in September when 49-year-old Ruben Arzaga was shot in the head while approaching an illegal logging site.

Chan, who studied in Manila at the Philippines' most prestigious private college, says the deaths make him question whether he should continue the programme.

"Every time we lose someone we get weaker. We get more afraid and we lose some of the idealism that we initially had when we came together," he says about a week after Arzaga's death.

"I can't help but feel I am somehow responsible for pushing not just him, but the others who have died before him, into this."

A perennial lack of funds compounds the problem, with potential donors often deeming their actions too confrontational. But Chan and his para-enforcers have always emerged from post-death depressions, while somehow finding a way to keep financing their operations.

On the way to Arzaga's funeral they stop in the forest near where he was murdered to try to confiscate another chainsaw.

They come across two sites where trees have been recently cut down.

It is raining heavily and the loggers have not returned to take away their new planks, so the para-enforcers walk out of the forest empty-handed.

But they have proved that, although weakened, they are not yet defeated. 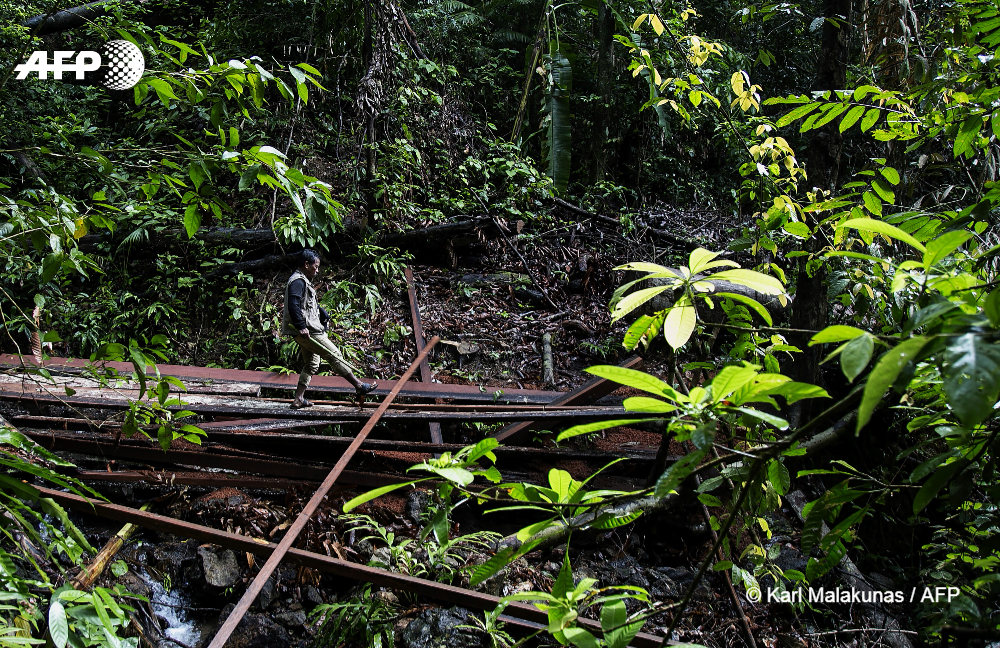