Second prize for his pictures of Gaza A Palestinian man holds up the body of one-year-old baby Noha Mesleh, who died of wounds after a UN school in Beit Hanun was hit by an Israeli tank shell, on July 25, 2014. Fifteen people were killed when Israeli fire hit a UN-run school in Gaza.
© AFP PHOTO/ Mahmoud Elhams

Special prize by jury for her pictures of the Kiev revolution 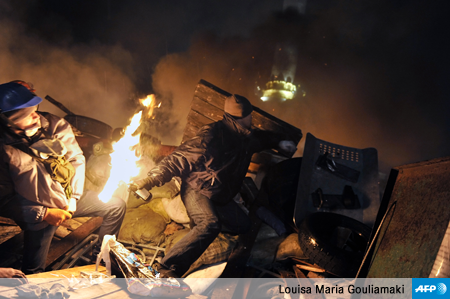 A protester hurls a molotov cocktail towards police from the barricades at Independence square in Kiev on February 19, 2014.
© AFP PHOTO / Louisa Maria Gouliamaki

More info about the prize +