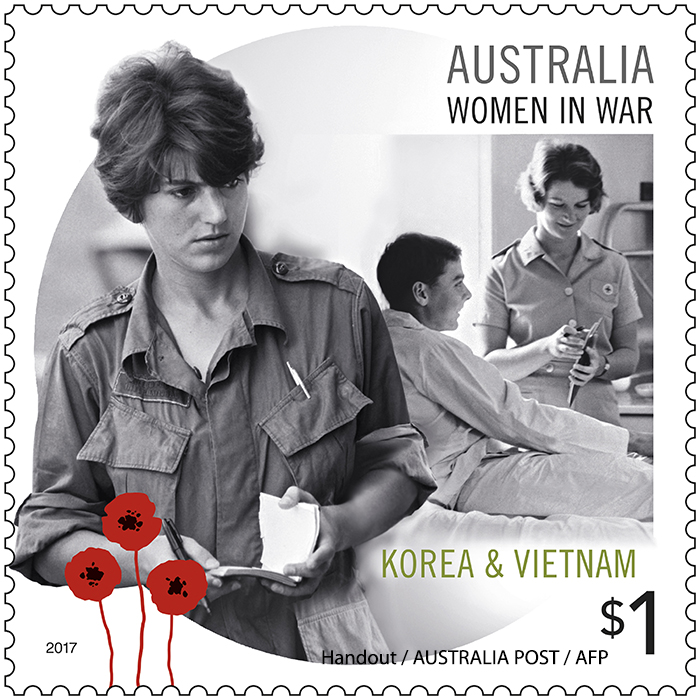 A crusading Agence France-Presse correspondent who enjoyed a storied career covering wars and other historic events has been commemorated on an Australian stamp.

Kate Webb, who died in 2007 at the age of 64, earned a reputation as a fearless reporter during the Vietnam War and covering other momentous stories in Asia during a career spanning four decades.

She is featured on one of five new stamps unveiled Wednesday to mark Remembrance Day on November 11, when a minute's silence is held to honour those who have fought and died for their country. The stamps will be issued on October 6.

"This stamp issue, the fourth in a series commemorating a century since World War I, acknowledges the important roles women have played in war and conflict," said Michael Zsolt of Australia Post.

Webb, who was born in New Zealand but moved to Australia with her family as a child, is shown on a stamp marking the Korea and Vietnam wars, along with Red Cross worker Rosemary Griggs.

In 1971 while covering the Vietnam War, Webb was reported killed after she was ambushed and taken prisoner by North Vietnamese troops in Cambodia, who marched her and five others through the jungle in a 23-day ordeal.

A front-page obituary was published the New York Times and the body of another woman wrongly identified as hers -- but just as her family held a memorial service for her in Sydney, Webb and the other captives were freed.

World War I, World War II, the conflicts in Afghanistan and Iraq, and Australia's role in peacekeeping operations also feature in the stamp series.

Prior to and including World War I, the involvement of Australian women in conflict zones was almost entirely limited to nursing.

By the Vietnam War, they held many roles, including as members of civilian medical teams, Red Cross support, entertainers, and journalists. Today, women are employed throughout the armed forces.

The 2017 edition is currently welcoming applications, with the winner receiving 3,000 euros (approximately $3,575) in cash, which will be awarded at a prize-giving ceremony.

The contest is open to locally hired Asian photo, video and text journalists, for work published during 2016.