"Neighbouring rights: a question of life or death" by Sammy Ketz 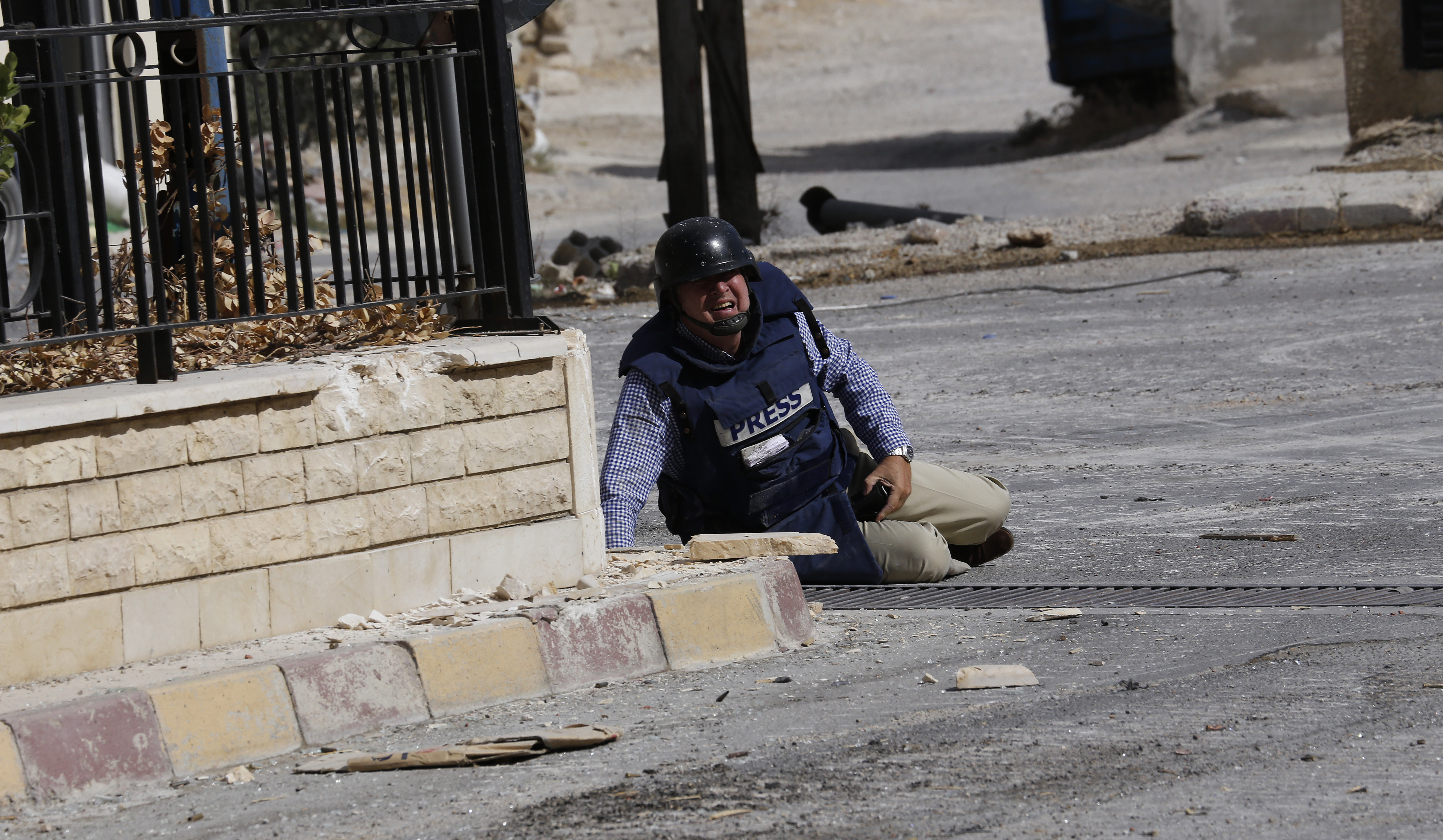 AFP reporter Sammy Ketz lies on the ground during sniper fire in the ancient Christian Syrian town of Maalula, on September 18, 2013

Dear Members of the European Parliament,

I was on a mission to write a reportage in Mosul, the Islamic State group's former capital in northern Iraq, about children returning to a school shut down for three years by the jihadists. I was thinking of how best to describe the joy of those children as they returned to their long-forbidden desks in that ruined city.

Sitting at a restaurant with the photographer, video journalist and AFP driver before heading back to Baghdad, I read on my laptop an article about the European debate on neighbouring rights and the plan to apply them to the press. It grabbed my attention but did not come as a shock.

After five years crossing a war-shattered Syria where on several occasions I narrowly escaped being killed by snipers' bullets or seasoned gunners' shells, I had just arrived in Iraq for the third time since the US invasion of 2003.

In more than 40 years of reporting, I have seen the number of journalists on the ground steadily diminish while the dangers relentlessly increase. We have become targets and our reporting missions cost more and more. Gone are the days when I could go to a war in a jacket, or in shirtsleeves, an ID card in my pocket, alongside a photographer or video journalist. Now you need bullet-proof jackets, armoured cars, sometimes bodyguards, and insurance. Who pays for these expenses? The media, and it is a heavy cost.

Yet, even though they pay for the content and send the journalists who will risk their lives to produce a reliable, complete, trustworthy and diverse news service, it is not they who reap the profits but the internet platforms, which help themselves without paying a cent. It is as if a stranger came along and shamelessly snatched the fruit of your labour. It is morally and democratically unjustifiable.

So many friends have stopped reporting because their media organization closed or could no longer pay them. Up until the day they put away their pens and cameras, we had shared the terrible fear of hiding behind a wall that trembled as intensely we did from the impact of the explosions; the indescribable joy when we succeeded, when we could tell the world the "truth" that we had seen with our own eyes; the extraordinary meetings with warlords and their heavily armed men who smiled as they toyed with their pistols or daggers and watched as we interviewed their bosses; the poignant sorrow when faced with dazed, trapped civilians, the women awkwardly protecting their children as  bullets scraped the walls of the shelter in which they had found brief refuge.

The media have suffered a long time before reacting, struggling with the consequences rather than the cause. For lack of money, they have laid off staff almost to the point of the absurd: newspapers that are barely staffed with journalists. Now they are asking for their rights to be respected so they can carry on reporting the news. They are asking for the sales revenue to be shared with those who produce the content, whether they are media or artists. This is the meaning of "neighbouring rights".

We can no longer swallow the lie spread by Google and Facebook that a directive on "neighbouring rights" would threaten people's ability to access the internet for free. No. Free access to the web will endure because the internet giants, which now use editorial content for free, can reimburse the media without asking consumers to pay.

Difficult? Impossible? Not at all. Facebook made $16 billion in profits in 2017 and Google $12.7 billion. They simply have to pay their dues. That way the media will survive and the internet titans will be contributing to the diversity and freedom of the press they claim to support.

I am convinced that the members of parliament who have been misled by deceptive lobbying now understand that non-paying access to the internet is not at risk. At stake is the freedom of the press because when newspapers run out of journalists that freedom, which is supported by members of parliament from every political side, will be gone.

Countless times I have been face to face with people who were blockaded, isolated, and defenseless, who asked just one thing: "Tell people what you have seen. That way we have a chance of being saved." Should I reply: "No, do not raise your hopes. We are the last journalists. Soon there will be no more because we are disappearing for lack of money"?

Remember that Facebook and Google employ no journalists and produce no editorial content. But they get paid for the advertising linked to content that journalists produce.

Every day, journalists investigate all aspects of life so as to inform their fellow citizens. Every year, prizes are awarded the most courageous, intrepid, talented journalists. We cannot allow this fleecing of the media of their rightful revenue to culminate in a day without prizes, for lack of candidates with the means to report on the ground.

It is time to react. The European Parliament must vote massively in favour of "neighbouring rights" for the survival of democracy and one of its most remarkable symbols: journalism.

With the support of:

Jean-Pierre Martin, reporter at large since 1984 for RTL Belgique . Has covered the main conflicts in the world during the last 30 years. He works more specifically on Middle East and Central Africa and the year he spent in 1994 in Rwanda left its mark on him.

Svetsolav Terziev, analyst for The Sega Daily, PhD in Journalism, professor in Journalism at the University of Sofia and the Institute of Economy of Sofia, shortlisted laureate for the European Press Prize 2015

Mads Nissen, documentary photographer and author of three books, awarded more than 60 international prizes including The World Press Photo of the Year (2015).

Jean-Marc Gonin, reporter at large and editor in chief of Figaro Magazine (France)

Caroline Fetscher, reporter and columnist for Der Tagesspiegel, Germany. She has covered among other issues the Kosovo war of 1999 and the International Criminal Tribunal for the former Yugoslavia in The Hague

Will Vassilopoulos, freelance video journalist. Primarily working for Agence France-Presse (AFP), he went behind the camera in 2011 and has since covered topics such as Greece’s economic crisis, political unrest in Egypt, Turkey and Romania, the conflict in Ukraine and most recently the migration crisis in Europe. He is the recipient of the 2016 Rory Peck Award for News for his film "Fear and Desperation: Refugees and Migrants Pour into Greece”

Lara Marlowe, France Correspondent, The Irish Times. As a foreign correspondent for The Irish Times since 1996, Lara Marlowe has covered France, Barack Obama’s first term in office and a dozen wars including former Yugoslavia, Iraq and Afghanistan. She has won three press awards.

Enrico Franceschini, London correspondent for La Repubblica, previously based in New York, Washington, Moscow and Jerusalem. Winner of the Premiolino prize for his reportage on the attempted coup in Moscow in 1993

Lorenzo Cremonesi, reporter at large for Corriere della Sera (Italy). He covered conflicts from the Israeli-Palestinians to Lebanon, Iraq,  Syria, Afghanistan, Pakistan, India, and Ukraine. He got numerous awards, the most recent “Il Premiolino” in Milan.

Wojciech Bojanowski, reporter for TVN (Poland), Journalist of the Year 2017 and Prize in Investigative Journalism awarded by Polish media

Bud Wichers,  reporter at large (Netherlands), reporting since 2002 from Syria, Iraq, Afghanistan, Libya, Turkey, Jordan, Israel, Gaza and other MENA countries, as well as other high-risk countries such as Ukraine, Colombia and Venezuela. Produced short documentaries such as Voices from Israel and Palestine, Unspoken Truth, Innocence Interrupted, In search of Al-Qaeda, and Searching for ISIS.

Thomas Verfuss, representative in the Hague of Journalists For Justice.

Thomas Erdbrink, Bureau Chief of the New York Times in Tehran and reporter for De Volkskrant. His TV series “Our man in Tehran” won the top tv and journalism awards in the Netherlands in 2016, the Zilveren Nipkov award and two Tegel awards.

Ovidiu Nahoi, editor in chief RFI Romania, since 2015 producer of TV programme “Geopolitics”, permanent contributor to “Dilema Veche” magazine, Special Prize for the Promotion of Democracy by the Romanian Press Club 1999, Prize for Excellence in the Promotion of European Values, Romanian European Institute 2014, Special Prize for TV documentary “To the East of Europe” by the Union of Professional Journalists 2015, Prize for Excellence in Journalism by the Romanian Chamber of Commerce and Industry 2015.

Paulo Moura, independent journalist, former Reporter at large for Publico (Portugal), Gazeta Prize for reporting in Egypt and Libya in 2012

Uldis Dreiblats, investigative journalist and publisher, winner of the Bonnier Prize (1998) and Excellence Award of the Latvian Journalists' Union (2007).

Jonas Eriksson, CEO and director of editorial for the Swedish press agency TT

If you are a journalist and you wish to support the appeal for signatures, could you please send us a mini biography and your contact details at the following address : Support-neighbouring-rights@afp.com