Reporters appeal to UN council on behalf of slain colleagues

Journalists from around the globe seized a rare chance Wednesday to plead before the UN Security Council for action over the growing numbers of assassinated reporters.
18 Jul 2013

AFP's prize-winning Somalia correspondent Mustafa Haji Abdinur told the 15 council ambassadors that he was a "dead man walking" because of the dangers he faces covering his country in conflict. "When a journalist is killed the news dies too," Abdinur, a keynote speaker at the event, said as he called for help rebuilding the justice system in Somalia and justice for the almost 1,000 journalists killed around the world since 1992.

Abdinur spoke less than a week since Liban Abdulahi Farah, a reporter for the Kalsan satellite television station, became the latest reporter killed in Somalia. The New York-based Committee for the Protection of Journalists (CPJ) estimates that 28 journalists have been murdered already this year. 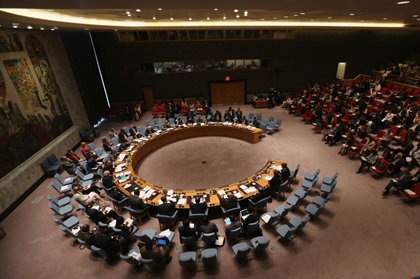 "Like so many others in my profession, on the dusty streets of Mogadishu they call me 'a dead man walking'," Abdinur, winner of a CPJ International Press Freedom Award award in 2009, told the council. "My story is not unique. I am here today simply because I am lucky, because the gunmen that have killed so many of colleagues, my friends, have not yet found me," he added.

UN Deputy Secretary General Jan Eliasson told the meeting that journalists are the "lifeblood" of democracy.

Eliasson highlighted that more than 40 journalists and bloggers have been killed in Syria over the past year and more than 100 in Afghanistan since 2006. He said it is "shocking" that 90 percent of murders of journalists go unpunished.

The meeting was also addressed by Richard Engel a correspondent for American television channel NBC who was kidnapped in Syria this year, Ghaith Abdul-Ahad, a correspondent for British newspaper The Guardian in Iraq, and Kathleen Carroll of the Associated Press news agency.

It was the first debate on journalism at the Security Council since the UN's prime defender of peace and security passed a resolution on journalism in 2006. The debate was organized by the United States as the council's president for July.

Back to summary
close