AFP wins seven prizes at Pictures Of the Year international Jean-Philippe Ksiazek, won 2nd prize in the Spot News category for his photo of a demonstrator holding a bouquet of flowers in one hand and a flare in the other as he faces riot police during a demonstration in Lyon against the government’s planned labour reform.
Ksiazek, who was born in 1964, has been based at AFP’s Lyon bureau since 2001. He joined AFP’s Strasbourg bureau in 1989 as a photojournalist, and was later posted to Brest and then Abidjan from 1996 to 2001. Over the course of his career he has covered numerous international stories: the tsunami in Sri Lanka, the earthquake in Haiti and conflicts in Africa, Afghanistan, Kurdistan, Iraq, Kosovo and Albania. Aris Messinis won 3rd prize in the News Picture Story and Spot News categories. On board the Astral with the NGO Proactiva Open Arms, Messinis reported on a rescue operation off northern Libya. The prize-winning shot in the “Spot News” category shows migrants attempting to pull a child out of the water as they wait to be rescued.
The 40-year-old Greek photographer joined AFP in 2003. He has won numerous international awards for his work in Libya and Egypt. In 2016 he won the Visa d’or News award at the Visa pour l’Image photo festival for his coverage of migrants arriving on the beaches of Lesbos. 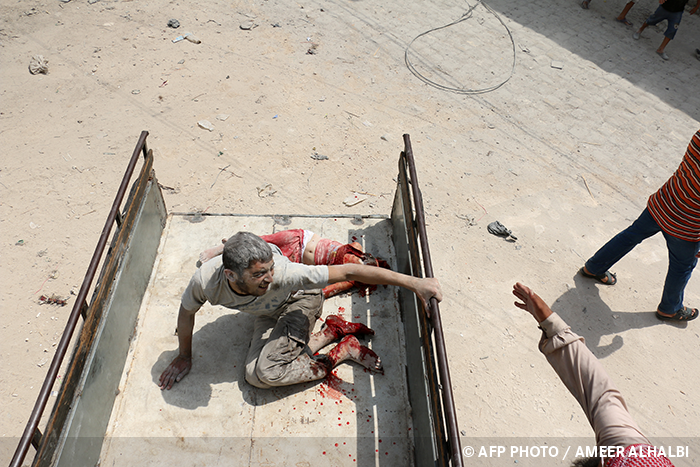 Ameer Alhalbi received an Award of Excellence in the Impact category. The award-winning photo, taken on 25 August 2016 after an air strike on the Bab al-Nairab neighbourhood of Aleppo, shows a wounded man sitting in the back of a truck with the body of a child lying behind him. The 21-year-old Syrian photographer began his career as a photojournalist in 2013 and began working for AFP in February 2016, covering the Syrian conflict from Aleppo. He described the horrors of daily life under aerial bombardment in an article for AFP’s Correspondent blog entitled A Day of Hell in Aleppo. He was awarded second prize in the Spot News category of the 2017 World Press Photo awards and second prize in the 2017 Days Japan awards. Noel Celis won 3rd prize in the General News category for a photo taken at an overcrowded prison in Quezon City, Philippines. Built 60 years ago to accommodate 800 inmates, it now houses nearly 4,000. The men take turns sleeping on stairs, on the prison’s open air basketball court and in hammocks made from old blankets. Celis, a 33-year-old Filipino photographer based in Manila, joined AFP in 2009 after working for local newspapers. Shortly after the presidential election in 2016, he began to follow the impact of the anti-crime crackdown conducted by Rodrigo Duterte. He described this coverage in an article on the AFP Correspondent blog.
His prison coverage earned him the Varenne Nikon international photo prize awarded by the Fondation Varenne in 2016 and third prize in the 2017 World Press Photo General News – Singles category. Luis Acosta won an Award of Excellence in the General News category for his photo of two FARC (Revolutionary Armed Forces of Colombia) members resting in a remote jungle camp. He followed this group of fighters in February 2016 as they were preparing to lay down their arms under the peace agreement reached with the government after half a century of conflict.
Acosta, an AFP photographer since 2001, worked in the Mexico City bureau for six years before becoming head of photo at the Bogota bureau. In 2012 he received the Simon Bolivar prize – Colombia’s most prestigious journalism award – for his report on female victims of acid attacks. François-Xavier Marit won 2nd prize in the Olympics Action category for an underwater shot of Britain’s Thomas Daley in the Men’s 10 Metre Platform semi-final during the Rio Olympics diving event.
Marit, born in 1964, joined AFP in 1984. As technical editor-in-chief for photo, he covers special events for the Agency and plays an organisational role in the photo department. At the 2004 Athens Olympics he set up the first underwater camera inside a pool. He has a passion for the technical and artistic aspects of photography, and has written about the development of underwater photography and other recent innovations in an article on AFP’s Correspondent blog. Martin Bureau won 3rd prize in the Olympics Action category for his photo of American swimmer Chase Kalisz at the start of the 400 metre Individual Medley final at the Rio Olympics.
Bureau, born in 1979, is based in Paris. In the 17 years since he joined AFP in 2000, he has covered the Olympics in Turin, Beijing, Vancouver, London and Rio, two football World Cups and three rugby World Cups – plus the war in Afghanistan, the Tunisian revolution and fashion and political news in Paris.

About AFP:
AFP is a global news agency delivering fast, accurate, in-depth coverage of the events shaping our world from conflicts to politics, sports, entertainment and the latest breakthroughs in health, science and technology. With 2,300 staff spread across almost every country, AFP covers the world 24 hours a day in six languages. AFP delivers the news in video, text, photos, multimedia and graphics to a wide range of customers including newspapers and magazines, radio and TV channels, web sites and portals, mobile operators, corporate clients as well as public institutions.