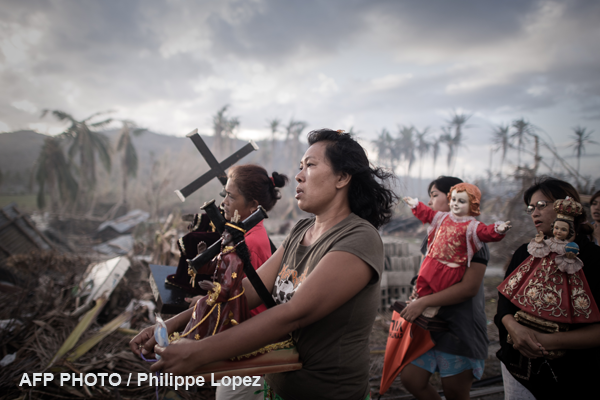 Philippe Lopez received the spot news award for his haunting image of a religious procession of women and children taken on November 18 last year in the aftermath of Typhoon Haiyan in the Philippines. The photograph, with a devastated landscape as the backdrop, had already been chosen by Time magazine as one of the top ten images of 2013. Asia specialist Philippe Lopez joined AFP’s Phnom Penh bureau in 2000 and is currently a staff photographer at the agency’s Asia-Pacific headquarters in Hong Kong. “This photograph sums up the faith of a people who continue to move forward despite the scale of the disaster,’” he said. “I am delighted that the jury chose this image of hope.” Jeff Pachoud’s winning image captured a dog sled race from a helicopter above Megève in France on January 18 2013. It shows the competitors against a landscape of unblemished snow. “I remember this special moment when everything was just perfect for capturing this surrealist setting,” he said. He joined AFP in 2006 and is based in Lyon in France where he covers regional and international news.

AFP chairman Emmanuel Hoog commented, “These two prizes awarded to AFP show the diversity of the agency’s production. Philippe Lopez’s poignant image of the ravages of Typhoon Haiyan made front pages across the world. Jeff Pachoud’s image shows another facet of the talent of our photographers in covering world events.