Javier Manzano, a freelance photographer working for Agence France-Presse, won the 2013 Pulitzer Prize for feature photography on Monday April 15 for a photograph of two Syrian rebels guarding their position in the embattled city of Aleppo. It is the second year in a row that a photographer working for AFP has been awarded the most prestigious US journalism prize after Massoud Hossaini of Afghanistan won in the Breaking News category in 2012
16 Apr 2013

The official citation said Manzano was honored "for his extraordinary picture, distributed by Agence France-Presse, of two Syrian rebel soldiers tensely guarding their position as beams of light stream through bullet holes in a nearby metal wall." 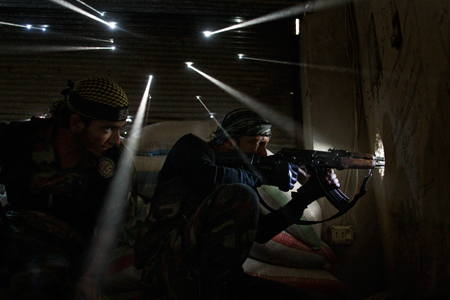 Born in Mexico and currently based in Istanbul, Turkey, Manzano moved to the United States at the age of 18 and focused his work on cross-border issues between the country of his birth and the US, according to the Pulitzer citation. Working first as a photographer and video journalist for newspapers, he later added television and digital media. He worked for the Rocky Mountain News until that paper closed in 2009 and has since worked as a freelance photographer covering conflicts in Mexico, Afghanistan and Syria.

The Pulitzer winning photograph was part of a series of photos taken by Manzano in Aleppo in October 2012 which were recognised in the 2012 World Press Photo awards.